Three things in life are guaranteed as far as I am concerned, death, taxes, and whitetail deer going crazy for a good food plot like big-n-beasty. Fortunately for everyone I do not have enough knowledge to enlighten you in the first two topics, but the latter, is one of the sole reasons one of the top bucks on my hit list hit the dirt on October 28th. Dating back to getting trail cameras in the woods in July, inventory of a buck I had named “Twister” started to stack up. Twister was an older deer that I have had history with over the past 3 years for sure. I had named him Twister last year after noticing one of his split brow tines appeared to twist with the other. With the help of a good hearty Frigid Forage food plot, I was able to keep tabs on Twister throughout August and September. Twister frequented the plot of roughly 3 acres of Big N Beasty almost on a daily basis, season came around and I was finally able to lay eyes on him on hoof and I then knew he was a caliber of buck worth of being chased. He was a mature buck, so this meant he wasn’t going to walk by a tree stand at 5 o’clock on a 60-degree September day. He was going to take some hours to zero-in on him. Waiting until the full-swing of the rut in north-central Minnesota was too risky, he could be three properties over in an hour and the orange army of gun hunters would sure take advantage of him come November. It was a matter of finding his transition point in his natural habitat. Finding exactly what he was doing from the time he got up from his bed to the time he came out to munch on the brassica mix plot was the goal. I mean, every other deer on that 120-acre piece was so eager to come out and eat every day, but not Twister. Day after day went by and he came out routinely within 15 minutes of last light. My opportunities were coming and going by the day. So, I had taken a few days off to hunt prior to the Halloween weekend. I had dedicated that time to hit the hardwoods after locating a bedding area that seemed to hold a good population of deer. Morning and evening came and went my patience and time were wearing thin. I got eyes on another hit list buck one morning, but there were two problems: he was out of range, and he wasn’t Twister. My last available day to hunt before the gun season came the following weekend was on the evening of October 28th. The evening just had a little different feel than the rest. Temps were in the mid-40s, the wind was in my favor, and deer were on the move. Saw a few does and young bucks, but not him. Twister had shown face roughly 30 minutes before dark and all it took was him locking eyes with the two young bucks in front of me to interrupt his evening stroll to the food plot to get him to 25 yards broadside. He read the script I had wrote for him in my head perfectly. The shot situation was less than ideal, but surprisingly made for a very short recovery the following morning. Twister was in my hands, the hours in the tree more than paid off. If you take the right steps, provide the habitat, plant the food plot, and hunt smart it is going to pay off. You will then have the leg up on the neighbor who has shot your buck the last 3 years. Having it all come full circle is bittersweet. The fight is over, planning for next year begins now. The only 3 guarantees you can get from me now are: back strap for dinner, Big N Beasty getting planted next season, and a smile on my face for the foreseeable future. 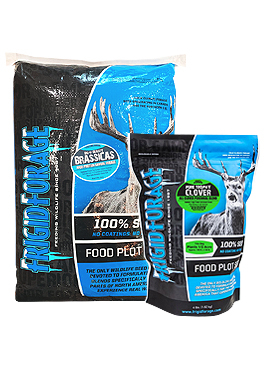